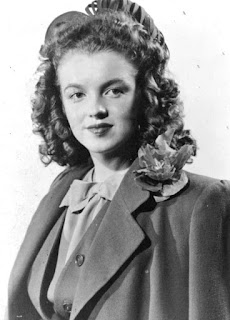 A young Norma Jean Baker in the early 1940s. Many a Penny Pentecostal would still be rocking this same suit style well into the Carter Administration. (Source)

My latest Audible book streaming through my headphones is “Marilyn Monroe: The Biography” by Donald Spoto and narrated by Anna Fields.

Since I was a kid, I’ve been fascinated by stars who, despite talent, money, fame and beauty, were downed by the suffocating weight of their own inner psyches. Perhaps it was a weird fascination for an elementary school student, but it was there, and only grew as I got older.

If I had to guess as to why, it probably had something to do with my mother’s severe depression. She was (and is) my first exemplar of femininity and beauty. She was a star in my mind, gifted with a lovely soprano singing voice that at times verged on the operatic. She drew, painted, sketched and did calligraphy. She made music and art. That was beauty. She was beauty.

She was also acutely depressed, and at other times, quite anxious. Before giving birth to any of us kids, she had to be hospitalized in a psychiatric hospital after a breakdown that left her hearing an array of voices that so frightened her she stayed in bed with fits of tears and screams interspersed with prayers to God for relief.

I learned of this episode in my mom’s life fifteen years later, when I was 8, from her mom during a summer visit. It scared me. So horribly scared me that I had reoccurring nightmares about it for years. It also launched in me a desire to understand why. Why had Mommy, with a speaking voice not too different from the soft, childlike one Marilyn affected in many of her films, lose it? And how did she regain it, enough to have us three and become the neighborhood Kool Aid mom? Would she crack again? Would I, one day, also suffer a similar fate?

I read about Dorothy Dandridge, Judy Garland, and of course, the patron saint of the troubled star, Marilyn Monroe. There was a lot to sift through about the Blonde Bombshell- the affairs, the failed marriages, the glamour and the barbiturates. Beyond that, there was a very sad childhood with an absentee mother, an unknown father and foster homes.

We all spent some of our most formative years belonging to Pentecostal Holiness churches.

Let me pause here to say, most definitively, that growing up a Penny Pentecostal is NOT a one way ticket to Crazytown. Millions of people have and are fine.

This information sticks out to me because it’s like I found another former member of the club that shaped me so- my childhood, adolescence and even on into adulthood. What makes this information ever more startling is how Marilyn came to embody so much that many Pentecostals stridently abhor- the makeup, the cut and dyed platinum coiffure, the tight clothes, and all that jewelry. All that unGodly glamour in a shapely 5’5 package.

Over in the Entertainment section of “How Stuff Works”, Susan Doll recounts: “

Norma Jeane’s mother, who most often used the name Gladys Baker, placed the infant Norma Jeane in the care of Ida and Wayne Bolender of Hawthorne, California. Life had not been particularly kind to Gladys. She had had two children — Berniece and Hermitt Jack — by her first marriage to Jack Baker, but he had taken the children away from her and moved to Kentucky prior to her marriage to Edward Mortenson. Supposedly, Baker had left a note for Gladys that read, “I have taken the children, and you will never see them again.” The absence of her first two children caused Gladys great pain, and her inability to take care of Norma Jeane added to that heartache and stress. Gladys’s family had a history of mental instability. Both of her parents, Otis and Delia Monroe, finished out their lives in mental institutions, and Gladys’s brother, Marion Monroe, suffered from a problem diagnosed at the time as paranoid schizophrenia. Gladys battled demons of her own and spent much of her adult life in institutions. … Ironically, perhaps, when Gladys boarded out Norma Jeane to the Bolenders 12 days after the baby’s birth, it was because of financial difficulties — not mental ones. Gladys went back to work at Consolidated Film Industries, paying the Bolenders five dollars per week to look after her baby. Each Saturday, Gladys would take the trolley to Hawthorne to visit Norma Jeane, who remembered Gladys as “the lady with red hair” rather than as her mother. A devoutly religious couple, Wayne and Ida Bolender lived a comfortable existence in Hawthorne, a less-than-fashionable suburb of Los Angeles. Wayne worked as a postal carrier and was fortunate enough to remain employed throughout the Depression. In his spare time, he printed religious tracts.

Marilyn would later remember the couple’s devotion to their religion as one that approached zealousness. She claimed that as the young Norma Jeane, she had to promise never to drink or swear, she had to attend church several times a week, and she was repeatedly told that she was going to Hell. Norma Jeane quickly learned to hide from the Bolenders if she wanted to sing, dance, or act out a fantasy life “more interesting than the one I had.” Though Norma Jeane regularly attended church with the Bolenders, she was taken by her grandmother, Della Monroe, to the Foursquare Gospel Church to be baptized by the flamboyant evangelist Aimee Semple McPherson. Della, a devout follower of Sister Aimee, had her granddaughter christened “Norma Jeane Baker.”

By the way, if you’re unfamiliar with Aimee Semple McPherson, who had an altogether fascinating career that mixed Hollywood theatrics with preaching the Good News, check out this “American Masters” episode:

Spoto takes great pains to link Marilyn’s early upbringing in holiness- which demanded a certain form of outward perfection to exemplify supposed inner godliness- to her later years spent chasing a level of flawlessness that fed her anxiety and depression. Of course, only Marilyn knew if that was true, but it’s an interesting thought to ponder.