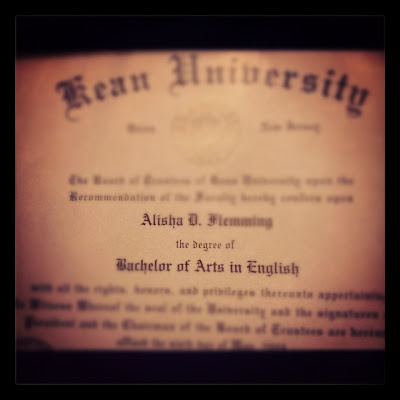 As I mentioned, somewhat in passing a couple of weeks ago, I resigned from my full time job. It was hard. So very hard that three weeks later, I still feel at a loss for words. It’s not because I loved my job. Because quite frankly, I had no warm feelings towards it. The people- my boss, the coworkers and the students I helped, yes, very much so. But the filing, memos and meetings- eh, not so much. It was far better than the previous job, but it was still just a job. I don’t mean that in a disparaging way. If it weren’t for those jobs, I wouldn’t be who I am today. I’m extremely grateful for them. I mean they weren’t part of the career I had mentally laid out to be a writer. Not a blogger. Not an occasional freelancer. I mean writer. Like in the 20th century sense.

Yesterday, while Z was napping, I re-watched the “Plan B“ episode of “30 Rock“ from last season. One scene stuck out like Rose McGowan standing in a line-up next to Lindsey Lohan, Snooki and the NJ Tanning Mom (why on Earth they’d ever be in a line-up together outside of my mind, I have no clue). Here it is:

As much as it pains me to type this, I totally chose the wrong major. Unlike Liz, my parents did not allow me to major in English with a minor in Communications (!). I was on a full academic scholarship (Nerds ROCK!) and worked part time throughout college. I was actually an Education major who switched to English in the 4th quarter of the game much to the utter dismay of my Dad.
Since freelancing pays less than babysitting (really), I wound up taking a full time job with great benefits and not-so-good pay.
We all have to grow up some time. I had no intention of living under subways, even if the CEO of Friendster was there. Now maybe if Tom from MySpace were my neighbor… No, no, still not for me. To paraphrase Liz, I do not want to go to there.
***************************************************
I’m home now anyways. I have CIDP, and unlike the previous paragraph’s figurative pain, it has stopped me from working full time (outside the home that is- being a mom IS a full time job). It’s my plan, though, to get this thing under control and to go back out to work eventually. But… where to? My career, writing or journalism, is not a thing anymore. At least not a happening thing. It hasn’t been since the last time “happening” actually was a thing to say.
So what’s an awkward Black girl writer to do (who isn’t Issa Rae)? I don’t know. I guess discover Plan C. Or D. Or ride the whole alphabet.
Just be nice.

This is actually where I keep my degree. And yes, I know I need to clean up my closet.
College I Went to College for THIS?! Life Moi Throwback Thursday