Note: This post first appeared at my old blog, Far Above Rubies, on October 4, 2010. ~Alisha

I’m sitting in the local diner writing this on my laptop, the diner being every good Jersey girl’s version of “The Max” that Zack and Slater hung out in “Saved By The Bell.” But I’m by myself, sans Lisa and Screech, so I guess this would be like a deleted “Jesse studies alone” scene that wouldn’t even make the DVD collection. Of course, circa 2010.
I’ve got “Eat Pray Love” with me, which is pretty sad because I’ve been lugging this now worn book around for a month and Liz is just in India. Considering I typically devour books the way I just devoured the tuna triple decker I ordered, quick and easy, my inability to read this book straight through is beyond strange. I mean, I got through 3 Hemingway novels in less time than this a few months ago- including the ominous “For Whom The Bell Tolls.”
At first, I attributed the slow pace to a general dislike of the book. After all, Liz is needy and weepy and emotionally a wreck… at least when she’s not eating. She is funny and witty, and the self-deprecation, charming. But overall, she was grating at me somehow. It took to last week to pinpoint it- she’s so narcissistic… just like me.
Perhaps I should clue those who haven’t read the book or watched the movie in a little about Liz, aka Elizabeth Gilbert, author of “Eat Pray Love.” About 10 years ago, Liz found herself in the midst of a crumbling marriage, followed by an unhealthy relationship, and in a quest for God. She was lost, depressed and struggling. She was also fortunate enough to have a solid career as a writer and was able to turn a year long jaunt to Italy, India and Indonesia into a book deal. So pretty much supported by her publisher, she takes off in a pursuit of healing- physically, spiritually and emotionally.
Anyway, the book has been a runaway success, thus the big screen treatment with Julia Roberts. But living with Liz has been grating for me, so I’ve been checking in on her at only the most awkward of moments. Such as now, when the wifi at my “Max” is down and I’ve finished my tuna and on my second latte. I’ll admit it now, though. Liz is only a problem for me because as she holds up a mirror to her cracked psyche, I’m catching glimpses of myself.
“…why are you so sure that your micromanagement of every moment in this whole world is so essential? Why don’t you let it be?” Liz just asked herself this rhetorical question and so did I. The “let it be” part flashed me back to yesterday when upset over my health (as usual), I called my Daddy. He stumbled over his words, grasping at phrases of comfort, and came out with “Let It Be. You know, even the Beatles, and they weren’t Christian (uh duh), but they believed in ‘Let it Be.’ It will happen, you will get better.” Yeah, I don’t know what John and Paul had to do with St. John and St. Paul, either, but eh, when Scripture fails to come to mind, there’s nothing like 60’s pop tunes.

I would love to just “Let it Be” or as the Bible puts it, “Be still”, but I’m struggling with this. Actually, I’m losing at it. I’ve been begging God for some kind of sign, something to let me know I’ll be alright, I won’t have to wait 20 years for a diagnosis, that there  is some real life Dr. House waiting to begrudgingly limp into my life and cure me. Since God has not been forthcoming with a message, I’ve been seeking Him out, feeling like a blindfolded kid in the deep end of a cold pool screaming “MARCO!”… only to get my own echo as a response.
In search of a “Polo” other then the Don or a shirt, after hanging up with my Dad, I drove to a nearby Catholic church. I’m not Catholic, and this fact is obvious by the fact I don’t know the “Apostle’s Creed”, always sit and kneel 3 seconds behind every other parishioner and actually look people in the eye and smile when I give people the “peace” thingy. I guess part of being catechized is learning to drone through a Mass and give a stand-offish “peace” that’s just short of “hostility.” 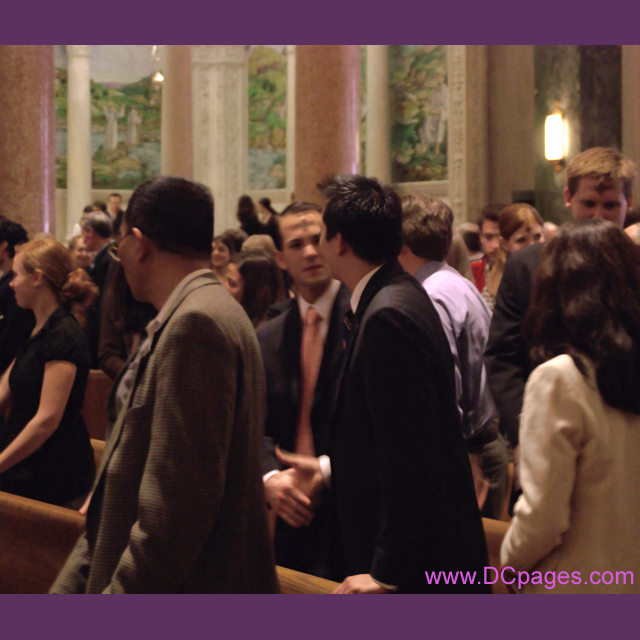 People offering a “Peace be to you” at an Ash Wednesday service. Maybe at Lent peace is more easily given then during “Ordinary Time.”
“Yeah, but what kind of life will I have? Do I have?” The priest seemed to answer this by giving a homily about how every life has purpose, how God knew us before we were born, and how we were no mistake. I then thought, “Maybe I’ve outlived my ‘purposefulness'” which I don’t believe is a word, but I said to God anyway. I knew I was losing the argument. The first reading came from Habakkuk (that’s a book I can say I rarely read): “How long, O Lord? I cry for help but you do not listen… Then the Lord answered me and said… For the vision still has its time, presses on to fulfillment, and will not disappoint; if it delays, wait for it, it will surely come, it will not be late.” It was followed by that verse in II Timothy 1 about God not giving “us a spirit of fear but of power, love and a sound mind.” And the passage about having the “faith the size of a mustard seed” in Luke 17. The Word of the Lord had beaten out my words of doubt… for awhile.

Later last night, K and I took a ride up to a scenic spot in the same town where Lauryn Hill lives… she occasionally emerges from her gated community to do a random interview or show. I was hoping for a spotting, the way “Weird New Jersey” followers seek out witches and Sasquatch. But no such luck. What I did see twice (because we kind of got lost) was a church sign outside a historic Presbyterian church which said “There is a time for everything, and a season for every activity under heaven. Ecclesiastes 3:1”” But when will this season end?” I said out loud. K just looked at me. He’s used to my outbursts. “I was just talking to God I said,” as I pointed to the sign. “I know,” he replied. “I want God to give me a sign.” I did not see the irony in asking God for a sign as I read His Word… off a sign.
I awoke this morning from a dream. In the dream, it was night, and I was standing outside my mother’s house talking to God. “God, I need to know if I’m going to be okay… can you please let me know… if you’re even LISTENING?!? And very slowly, stars dropped from the sky, taking the form of an angel right before me. At the sight of the heavenly being, Dream Me said, “Yeah, like that, God! Why don’t you give me a sign like THAT! Augh!” Just like that, the stars returned to heaven, my angel gone. Dream Me fumed, angry God wouldn’t give me a sign… just like the one I had seen.
My laptop gives its final warning, the battery is nearly dead. On the seventh day God rested. At seven percent power left, so did my laptop. I shut it off. Now I am Jesse Spano, scribbling in a notebook with a blue Bic ball point. But it still being 2010, I pull out my smart phone and listen to The Roots’ “Dear God  2.0.”
“Dear God, I’m trying hard to reach you/ Dear God, I see your face in all I do/ Sometimes, it’s so hard to believe it… But God, I know you have your reasons”. I sigh. Not from sleepiness. I downed two Macadamia lattes writing this. “Why is the world so ugly when you made it in Your image/ And why is living life such a fight to the finish?”  Erykah Badu’s “Window Seat” is up next. “I need your attention/ I need you next to me… need your direction…”
I shut off the music. Wishing to hear a “Polo”. Wondering… considering… perhaps I have. But for now, I’ll just let it be.
chronic illness Faith Moi Rants with Keiron Throwback Thursday