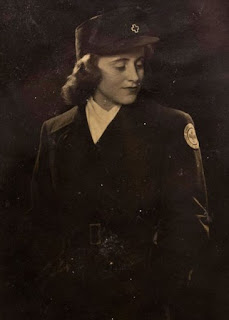 I just wrapped “Kick Kennedy: The Charmed Life and Tragic Death of the Favorite Kennedy Daughter” by Barbara Leming and narrated by Eliza Foss via Audible. I totally love this company, by the way. It’s been great being able to listen to books while still doing other things (Look Ma, no hands!).

Never hearing much about this particular Kennedy kid outside of her early death at age 28 being part of the supposed “Kennedy Curse”, I found Kick’s story to be particularly interesting.

In January, the Smithsonian Channel included her as part of their series “Million Dollar American Princesses”. Below is a clip from that episode.

Around the time of the episode’s airing, the New York Post did an interview with Kick’s namesake, 27 year old great-niece, Kathleen Kennedy, who is featured in the show. From the Post:

“When I was little, I wondered why I had a funny name,” Kathleen “Kick” Kennedy, 27, tells The Post. “I was named after my great-aunt, who was a lot of fun. She was a ‘kick’!” Born four decades after her ancestor’s 1948 death, the actress treasures a photo she has of the original Kick in her Red Cross uniform. … Like her brother the future president, Kathleen Agnes Kennedy — the fourth child of Rose and Joseph, future ambassador to the UK — was born in Brookline, Mass. After the family’s move to Bronxville, she attended the Riverdale Country School until her mother decided it was time for an education that precluded contact with the opposite sex.

In 1938, Joe Kennedy was appointed US ambassador to the United Kingdom, and whisked his brood to London. There, 18-year-old Kick was a sensation — the debutante of the year, a sunflower among pale English roses. “She was idiosyncratically charming,” says her namesake niece. “She would call the Duke of Marlborough ‘Dukie Wookie’ and chewed gum walking down the streets of London.” Friends told McTaggart how Kick — invited to one “Downton Abbey”-like country home after another — would kick off her shoes and sit on the floor. It was at one of those house parties that she met the future duke of Devonshire: William Cavendish, Marquess of Hartington. Kick called him Billy.
…
When Germany invaded Poland, in September 1939, Britain braced for air raids. Joe Kennedy sent his family to America, despite 19-year-old Kick’s pleas that she stay behind, with Billy. “She fought with her father for two weeks . . . begging him to let her stay,” the younger Kick Kennedy recalls in the documentary. But she wasn’t ready to defy her family. Not yet. For the next four years, she stayed in America, bouncing between Hyannisport and Washington. By then, Billy was in the British Army. McTaggart says he was even (briefly) engaged to someone else — impetus for Kick to return to Great Britain. And so she joined the Red Cross, which was sending volunteers to England. Once in London, she and Billy picked up where they left off. But as rich and devoted as he was, he was still Protestant — and Kick’s ardently Catholic mother, Rose, was enraged. 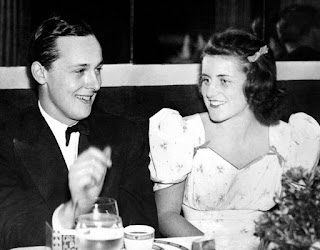 The Cath versus Prot thing made me think of my time dating Keiron, who was raised (and baptized) Roman Catholic and my Protestant upbringing (by way of Pentecostalism). K and I’s respective religious training was far more different than Billy and Kick’s. Really, Catholicism and Anglicanism? Outside of the cultural differences and the Pope, what were they were arguing about? Transubstantiation versus Consubstantiation?

Oh, and please, that was a joke. I’m most definitely not trying to get into a theological debate about the Real Presence in the Eucharist. Not the post for that.

Anyway, like the hubby and I, Billy and Kick went ahead and married, going the civil route.

“Marrying outside of the church was probably the worst sin one could commit,” Kick Kennedy explains. “It meant living one’s life in mortal sin and eventually going to hell.”

Hell be damned: Billy and Kick tied the knot in a civil ceremony in May 1944. Kick’s big brother Joe Jr. was the only Kennedy in attendance. They were together just four weeks before Billy was sent to the Belgian front. That August, Joe Jr. was killed when his plane exploded during a secret bombing mission over France.

Less than a month later, Billy was cut down, shot through the heart by a German sniper. “I can’t imagine anything more devastating,” the young Kick says of her aunt. “But the rule is, Kennedys don’t cry.”

No public tears is one thing, but I was aghast to learn that when Kick died just four years later in a plane crash in France, the Kennedy family didn’t even publicly mourn, with the exception of Papa Joe Kennedy. Why?

Soon [after Billy’s death] Kick was in love again — with Peter Fitzwilliam. Like Billy, he was Protestant and rich. He was also a playboy, a gambler . . . and married.
…
Only Kick’s father, Joseph, who was in Europe at the time [of her death], attended her funeral. Because of the scandalous circumstances of her death and JFK’s fledgling political career, McTaggart says, the Kennedys wanted little attention paid to her.

Politics above all, I guess. I liked Leming’s book, especially Foss’s narration, which gave Kick’s story a certain kind of warmth and a combination of naiveté and innocence. I did find it redundant, though, and it could have been edited down a bit. Overall, with the inclusion of a number of her letters to family and friends from the 1930s until her death, the story gives us a fleshed out, fully human Kick, and succeeds in giving this unknown Kennedy some well deserved attention.