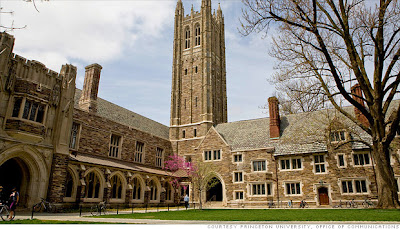 Princeton University. I did not attend. I did, however, drive by a number of times on my way to the neurologist’s office.

I attended and graduated from a state university, and one not in the top tier at that. That is not to say I received a second-rate education. Far from it. I learned so much, in class and even more-so, from occurrences not transcribed on to a syllabus. Reading “Lost in the Meritocracy” by Walter Kirn at The Atlantic, I was heavily reminded of my college days. Sure, he matriculated at Princeton around the time I was just arriving on this Earth, but there are some transcendental experiences with which I could relate:

With no stored literary material about which to harbor critical assumptions, I relied on my gift for mimicking authority figures and playing back to them their own ideas disguised as conclusions that I’d reached myself. The deployment of key words was crucial, as the recognition of them had been on the SATs. With one professor the charm was “ambiguity.” With another “heuristic” usually did the trick. Even when a poem or a story fundamentally puzzled me, I found that I could save face through terminology, as when I referred to T. S. Eliot’s The Waste Land as “semiotically unstable.” The need to finesse my ignorance through such stunts left me feeling hollow and vaguely hunted. I sought solace in the company of other frauds (we seemed to recognize one another instantly), and together we refined our acts. We toted around books by Jacques Derrida, and spoke of “playfulness” and “textuality.” We laughed at the notion of “authorial intention” and concluded, before reading even a hundredth of it, that the Western canon was illegitimate, an expression of powerful group interests that it was our sacred duty to transcend—or, failing that, to systematically subvert. In this rush to adopt the latest attitudes and please the younger and hipper of our instructors—the ones who drank with us in the Nassau Street bars and played the Clash on the tape decks of their Toyotas as their hands crept up pants and skirts—we skipped straight from ignorance to revisionism, deconstructing a body of literary knowledge that we’d never constructed in the first place. I came to suspect that certain professors were on to us, and I wondered if they, too, were actors. In classroom discussions, and even when grading essays, they seemed to favor us over the hard workers, whose patient, sedimentary study habits were ill adapted, I concluded, to the new world of antic postmodernism that I had mastered almost without effort. To thinkers of this school, great literature was a con, and I—a born con man who hadn’t read any great literature and was looking for any excuse not to—was eager to agree with them.

I never drank anything stronger than coffee with my profs (I shudder to think how some of the wackier ones would be wasted), but that… that contrarian deconstruction of great literature, of bad literature, of politics, poetry, religion, life… that type of postmodern thought ran rampant throughout my English department. While Kirn hid not reading the lit he so heavily lambasted, I didn’t. I didn’t have to because many of my profs never bothered to even assign them. How I received a Bachelors in English without having read a single book by Hemingway or Steinbeck, I’ll probably never know. But I felt like something of a con myself. Closing in on graduation, Kirn fumbled at what to do next. Years of prepping for academia left him feeling unprepared.

All around me friends were securing places in grad schools and signing contracts with worldwide corporations, but I found myself without prospects, in a vacuum. I’d never bothered to contemplate the moment when the quest for trophies would end and the game of trading on them would begin. Once, I’d had nowhere to go but up. Now, it seemed, I had nowhere to go at all. 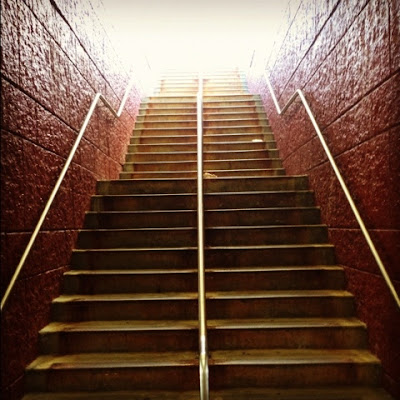 I felt similarly adrift as my undergrad career came to a close. I majored in English and Communications. I remember complaining repeatedly, “What does that even mean? I can speak and write. Big whoop.” SAT prep class, years of honing study skills and writing on index cards for drills to get to college. And just like that, college was a wrap. How did this relate to life?

… I couldn’t quote the Transcendentalists as accurately and effortlessly as he could. I couldn’t quote anyone. I’d honed more-marketable skills: for flattering those in authority without appearing to, for ranking artistic reputations according to the latest academic fashions, for matching my intonations and vocabulary to the background of my listener, for placing certain words in smirking quotation marks and rolling my eyes when someone spoke too earnestly about some “classic” work of “literature,” for veering left when the conventional wisdom went right and then doubling back if the consensus changed. Flexibility, irony, class consciousness, contrarianism. I’d gone to Princeton, and soon I’d go to Oxford, and these, I was about to tell Karl, are the ways one gets ahead now—not by memorizing old Ralph Waldo. I’d learned a lot since I’d aced the SATs, about the system, about myself, and about the new class the system had created, which I was now part of, for better or for worse. The class that runs things. The class that makes the headlines—that writes the headlines, and the stories under them.

My cynicism had peaked, but later that summer something happened that changed me—not instantly but decisively. A month before I was scheduled to fly to England and resume my career as a facile ignoramus, I came down with a mild summer cold that lingered, festered, and turned into pneumonia, forcing me to spend two weeks in bed. One feverish night I found myself standing in front of a bookcase in the living room that held a row of fancy leather-bound volumes my mother had bought through the mail when I was little. Assuming that the books were chiefly decorative, I’d never even bothered to read their titles, but that night, bored and sick, I picked one up: The Adventures of Huckleberry Finn. Then I did something unprecedented for me: I carried it back to my bedroom and actually read it—every chapter, every page. A few days later I repeated the feat with Great Expectations, another canonical stalwart that I’d somehow made it through Princeton without opening. And so, belatedly, haltingly, and almost accidentally, it began: the education I’d put off while learning to pass as someone in the know. I wasn’t sure what it would get me, whose approval it might win, or how long it might take to complete, but for once those weren’t my first concerns. Alone in my room, exhausted and apprehensive, I no longer cared about self-advancement. I wanted to lose myself. I wanted to read. I wanted to find out what others thought.

It’s oh-so amazing what one learns in the school of life, where the best classes often occur far outside ivory towers. Away from the pretending and preening, no need for false provocateurs. Meritocracy can shove it. Life lived apart from the race has much merit.