A long, long time ago, back when Clinton was still president, Diddy was still Puff Daddy, and Victoria Beckham was most famous for being oh so posh, I studied Machiavelli, St. Augustine and Plato in my senior year of high school.

Last week, I started thinking about Plato’s Allegory of the Cave which is from “The Republic“. If you’re unfamiliar with the story, here’s an excerpt from SparksNotes (you should the full thing out check it out, though… if 16 year old me could get it, so can you!):

Socrates describes a dark scene. A group of people have lived in a deep cave since birth, never seeing the light of day. These people are bound so that they cannot look to either side or behind them, but only straight ahead. Behind them is a fire, and behind the fire is a partial wall. On top of the wall are various statues, which are manipulated by another group of people, lying out of sight behind the partial wall. Because of the fire, the statues cast shadows across the wall that the prisoners are facing. The prisoners watch the stories that these shadows play out, and because these shadows are all they ever get to see, they believe them to be the most real things in the world. When they talk to one another about “men,” “women,” “trees,” or “horses,” they are referring to these shadows. These prisoners represent the lowest stage on the line—imagination. A prisoner is freed from his bonds, and is forced to look at the fire and at the statues themselves. After an initial period of pain and confusion because of direct exposure of his eyes to the light of the fire, the prisoner realizes that what he sees now are things more real than the shadows he has always taken to be reality. He grasps how the fire and the statues together cause the shadows, which are copies of these more real things. He accepts the statues and fire as the most real things in the world. This stage in the cave represents belief. He has made contact with real things—the statues—but he is not aware that there are things of greater reality—a world beyond his cave. 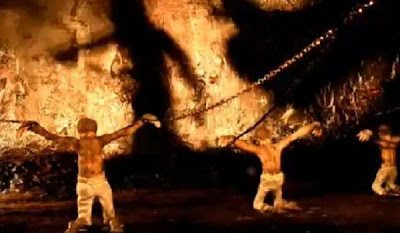 Next, this prisoner is dragged out of the cave into the world above. At first, he is so dazzled by the light up there that he can only look at shadows, then at reflections, then finally at the real objects—real trees, flowers, houses and so on. He sees that these are even more real than the statues were, and that those were only copies of these. He has now reached the cognitive stage of thought. He has caught his first glimpse of the most real things, the Forms. When the prisoner’s eyes have fully adjusted to the brightness, he lifts his sight toward the heavens and looks at the sun. He understands that the sun is the cause of everything he sees around him—the light, his capacity for sight, the existence of flowers, trees, and other objects. The sun represents the Form of the Good, and the former prisoner has reached the stage of understanding.

The allegory is about learning, how knowledge pulls us from chains, darkness and shadows and higher into the light. This lesson was very poignant to teen me, looking at a future of college, higher learning and new experiences to brighten the path before me. Now at thirty (!), the allegory has taken on a more spiritual meaning. My spiritual walk hasn’t been so linear, with a constant ascent to the Light. Nope, I’ve moved forward, only slip back into the darkness, actually choosing to go back to the chains at times. Chains of fear, chains of mistrust and anger and hopelessness. Yet, God in His mercy has continued to draw me to Him, to the Light who never dims. Upwards in the Truth, revealing the shadows for what they are, bringing me past the copies and to the ultimate Good, the Son, who gives peace that passes all understanding.