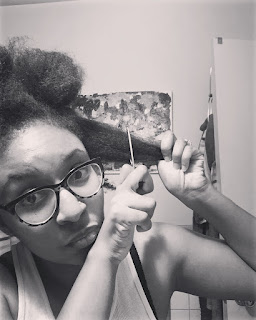 “Breast cancer and chemotherapy
Took away her crownin’ glory
She promised God if she was to survive
She would enjoy every day of her life, oh
On national television
Her diamond eyes are sparkling
Bald-headed like a full moon shining
Singing out to the whole wide world like, hey”
– India Arie, “Brown Skin”

On Wednesday evening, I walked into the bathroom, slid open the medicine cabinet, pulled out a small pair of scissors and paused for about five seconds. I took a deep breathe and cut a large hunk of my hair off on the left side. In less than ten minutes, the sink was full of fro. I was done. 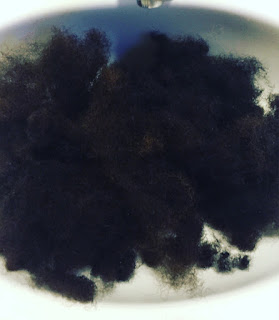 I had decided a long time ago that I’d rather get a hair cut before receiving the chemotherapy that is part of the complex Hematopoietic Stem Cell Transplantation. The staff at Northwestern Memorial let me know from the jump that I’d lose all my hair. Unlike with many chemo treatments prescribed for patients with cancer, the use of chemo here will be so intense that the hair wouldn’t just thin. I’d look like a honey brown cue ball within two months. No ifs, ands or combovers.Not wanting to resemble a 2016 female version of George Jefferson when clumps of my afro begin to drop out, I planned to go to a salon and get my first real, professional haircut since college.
But plans have been failed aspirations lately, and with less than a week before I’d be back in Chicago to finally get the transplant, and not wanting to spend any additional cash on strands that wouldn’t be around to greet the Summer Solstice in a couple of months anyway, I got my Edward Scissorhands on.
Zoe doesn’t like it. Not in the least. She wants my “old, better hair style back”. K… well, he’s said he likes it, but only did so after I asked him straight out. So, yeah.
I like that I haven’t had to do it since I washed and styled it that first night. But I feel a little… I’m not even sure. Unfazed? I thought I might’ve gotten a bit moved by it all. I now have the shortest hair in the house.
My husband, with his shaved, two-strand twisted fauxhawk, has longer hair than me. And still, my emotional reaction could be depicted like this emoji.
I’ve thought about it and I truly believe going natural while pregnant with Zoe pretty much took the sting out of this. I heard some of the nastiest comments when I let go of the relaxed locks. My appearance, value, sexual appeal and femininity were all questioned and even ruled quite lacking based on the texture of my hair. Why worry now when I barely have any? In those people’s eyes, I’ve been ugly.
I cried then, but their taunts toughened me. There I was, in my last year of my 20’s FINALLY getting it. My value is not in my appearance, and certainly not in the capricious opinions of others on said appearance. As India Arie sings, I am not my hair. I’m not my skin, either. I learned that lesson quite well as I got scar after scar from IVIG treatments, medicines, and surgically implanted ports.
I don’t have breast cancer, but like the woman in India’s song, I’ve done my praying and have decided to enjoy each day, “Bald-headed like a full moon shining”. 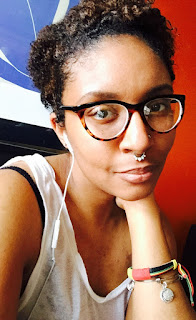 Join the discussion and tell us your opinion.

[…] hair maintenance in general. Eventually I told the story of how I had her dad shave my hair off in 2016 after chemo had it coming out in […]