After posting this last week, I felt conflicted. Well, maybe more than just conflicted. I think it’s safe to say I felt scared. My number of hits for the piece were actually better than most of my stuff lately, so people were checking it out. But… aside from April and Don, no one made any comments. On the FAR Facebook page, it didn’t get a single “Like”. Sure, a number of my posts don’t get feedback. That’s why in that little “About Me” bar to the right, I “HINT, HINT, HINT” that comments are welcome. I felt this was different, though. It wasn’t so much disinterest (especially with the higher amount of views) as sheer dislike. Had I offended my fellow Christians? Had I inadvertently stepped on some highly polished Sunday shoes? Don wrote, “One thing I can say about your blog and apparently you as a person – if whatever topic clearly goes against your Christian core, you don’t bite your tongue for nothing and no one. Lol.” The emphasis is all mine. And yes, he’s right. Very much so. I am opinionated. Sarcastic. Talk a lot (poor, poor K). The only time I’m biting my tongue is when I’m flapping my mouth so much I accidentally do so. I sat mulling over me. Why can’t I be like other Christians? I just don’t fit in. Yeah, sure, I might not be fluent in Christianese, but I can totally hold my own in conversation. I have listened to my fair share of Casting Crowns and Third Day, have watched more than a couple of Nooma videos, and read my fair share of Francis Chan and Don Miller. Yet, I still don’t fit in. I try, yes, but wind up seeming like Andrea in the first couple seasons of “Beverly Hills, 90210” classic. Poor nerdy tag-along, hopping buses from my grandma’s teeny out of district apartment to shadow behind Branden and Brenda at West Beverly. 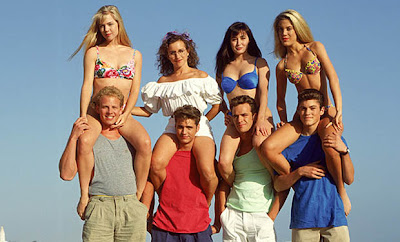 So while the rest of the girls showed off in bikinis, Andrea wore shorts and a off the shoulder ruffle top. And glasses. Yeah, she “belonged”. (Source)
So I asked a couple of people for feed back? Am I a bad Christian?
I know I’m a fail at the neo-Reformed, Mark Driscoll-type Christian. The main reason being that I’m not Reformed, “neo” or old school.
My appreciation for a few Nooma videos aside, I don’t fit the Rob Bell-esque Christian, either. I wholly accept the mystery of God, life and eternity. However, when I ask questions, I am at least trying to get answers.
I tried on the Prophetic Christian, but it wasn’t a good look for me. It was just so voluminous, so free-form. I realized, like my post breast-feeding boobs, I need solid support and structure.
I never worked as a Pentecostal Christian. I can’t shout, wail, get slain or even twirl a hanky with pizzazz.
I glanced at the Prosperity Christian, saw that it required more sowing than all the farmers in the heartland, along with the overuse of words such as “favor”, “birthright”, and “claim” that I didn’t even bother.
The Fundamentalist Christian, ever literal, was so ever wrong for me.
Oh how I wanted to be a Hipster Christian! I have a pair of appropriately thick framed glasses. A nose ring and tattoos! I love cafes! Studied postmodern critique! I even read Scripture almost exclusively off my iPad. But I quickly remembered why I’d never belong. I’m not hip. 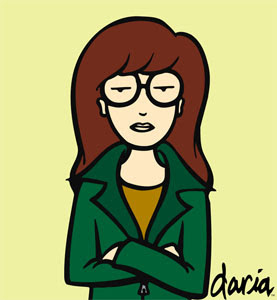 She rocked doc martins and thick frame glasses. But nope, she wasn’t hip, either. (Source)
After much self-absorption, uh er, reflection, I called K and explained my predicament. He agreed that I’m sarcastic (sometimes to a fault) and talk a lot. He added, “So you’re not any of those ‘types’. So you don’t ‘fit in’ with a lot of Christians. The important thing is for you to fit with CHRIST. You follow Him.”
My K, just as quiet as I am blabby, so full of wisdom.
I’ll keep striving to be like Christ, and always be thankful the Body has enough space for the neo-Reformed, Rob Bell-esque, prophetic, Pentecostal, prosperous, Fundies and the Hipsters.
And me.
Christianity Daria Faith Moi Throwback Thursday